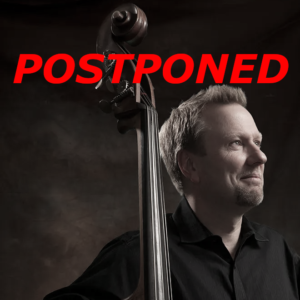 We are very excited to be restarting our Jazz at The Gasworks Series which has been on hold since renovations of the Gasworks began in the Fall of 2019. Unfortunately, due to the new Covid variant and the Government of Ontario’s January 3rd announcement regarding a return to a modified Step Two we have had to reschedule the Pat Collins Trio performance from January 27th until Thursday, May 19th.

If you have already purchased tickets for this event, they will be honoured for the May 19th show. Alternatively, we can transfer your purchase to another one of our seven concerts announced for this season, or you can request a refund on Eventbrite.

There is some uncertainty as to how long these restrictions will last so at this point, we are keeping the balance of our shows in place for now and will reschedule or cancel as necessary.

We will do our best to provide you with notice of any changes in scheduling at least 2 weeks prior to each show based on the Government safety measures that will be in place at that point in time.

During the last 19 months, scheduling any kind of live performance has been incredibly challenging and we all deeply appreciate your understanding and patience.

We sincerely hope that you are all keeping well and look forward to welcoming you to our newly renovated facility as soon as we are able.

Artistic Director and the HMC Board of Directors 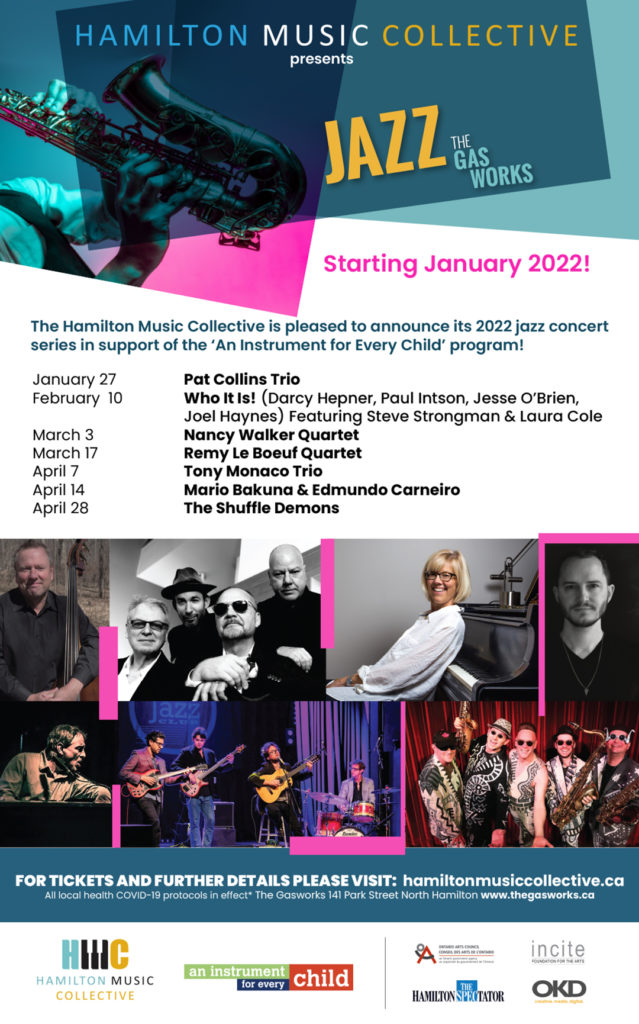 BUY SERIES TICKET FOR ALL 7 SEVEN SHOWS (SAVE 18%)

HAMILTON, ON – The Hamilton Music Collective announced Wednesday the return of the highly anticipated concert series ‘Jazz at The Gasworks’ with an eclectic lineup featuring top Canadian and international jazz artists.

The series is set to return to downtown Hamilton next month after a two-year hiatus due to building renovations. The often sold-out series has welcomed in the past jazz greats such as Juno-award winner Robi Botos, Larnell Lewis of Snarky Puppy, and Grammy-nominated Cuban pianist Manuel Valera.

The winter/spring series will feature several international touring artists including Brazilian composer and guitarist Mario Bakuna with percussionist Edmundo Carneiro, Grammy-nominated saxophonist Remy Le Boeuf, and American B3 jazz and blues organist Tony Monaco. “We are very excited to bring world-class jazz back to Hamilton” says CEO Astrid Hepner. “As well we are thrilled to be welcoming back our loyal audience and all jazz fans to a beautifully renovated performance space.”

Several Canadian favourites are also on the lineup including Toronto fusion funk mainstays The Shuffle Demons, Toronto pianist and composer Nancy Walker and ‘Who It Is!’, a jazz-funk ensemble featuring Darcy Hepner, Paul Intson, Jesse O’Brien and Joel Haynes.

The Gasworks building, owned by The John & Ellie Voortman Charitable Foundation, has undergone a $2-million renovation since its closure in 2018. The facility now boasts a larger lobby, accessible washrooms and elevator, and a new sound system.

Proceeds from the series benefit the An Instrument For Every Child program, an initiative by the Hamilton Music Collective which provides free instruments and high-quality music instruction to young people, including many disadvantaged children, in Hamilton.

The series kicks off on Thursday January 27 2022 with Canadian bassist Pat Collins featuring Reg Schwager and Tom Sczezniak. Series tickets are available for $260 (18% off ticket price), and general admission tickets are $45/$25 for students. Tickets will be available starting Friday December 1 at 10AM EST. Tickets can be purchased via Eventbrite or at hamiltonmusiccollective.ca.

Hamilton Music Collective (HMC) is a non-profit organization that was founded in 2008 by a local group of musicians, educators and community supporters, who are passionate about music and believe in its transformative power to enrich lives and empower students. HMC’s mission is to invigorate the music scene in Hamilton through professional live performances, education, events, workshops, and exhibits.

In 2022, we will be launching Musical Futures Summer Camp! Our camp provides an innovative, immersive experience that exposes youth to musical performance, creation and production in a safe and collaborative way, fostering personal growth and creativity.

We are pleased to announce the return of the Jazz at the Gasworks concert series in 2022!

This series showcases top Canadian and international musicians in jazz, blues, and improvised music. We are excited to welcome you back to the Gasworks following a $2.5 million transformation. Our new theatre has the same great stage, with a new sound system and expanded seating capacity for you to safely enjoy world-class music in downtown Hamilton!

Proof of full vaccination will be required to enter the building. Social distancing will be in effect and masks required.

Matt’s student Michael-Ange is spotlighted this week, one of our AIFEC xylophone and drum students.

This week we are celebrating a pair of students who have become great friends during their online lessons!

Brooklyn is our Student of the Week under our wonderful AIFEC instructor Gosia! She plays the violin.

The incredible Hansel is our Student of the Week for May 3rd. He speaks to our instructor Steve about his musical family, discipline, and the fun of learning piano!

Student of the Week Michelle talks with instructor Gosia about how the AIFEC program inspired her to learn the violin!

Ben is our Student of the Week! Thanks to AIFEC instructor David for his hard work!